Retinitis pigmentosa (RP) refers to a group of inherited diseases causing retinal degeneration and vision loss that worsens over time. More than 190 genes have been implicated in inherited retinal disease and RP accounts for approximately half of those cases. RP is highly heterogeneous; mutations in more than 50 genes are known to cause RP and nearly 3,100 mutations have been reported in these genes.25 Forms of RP and related diseases include Usher syndrome,26Leber’s congenital amaurosis, rod-cone disease, Bardet-Biedl syndrome and Refsum disease. 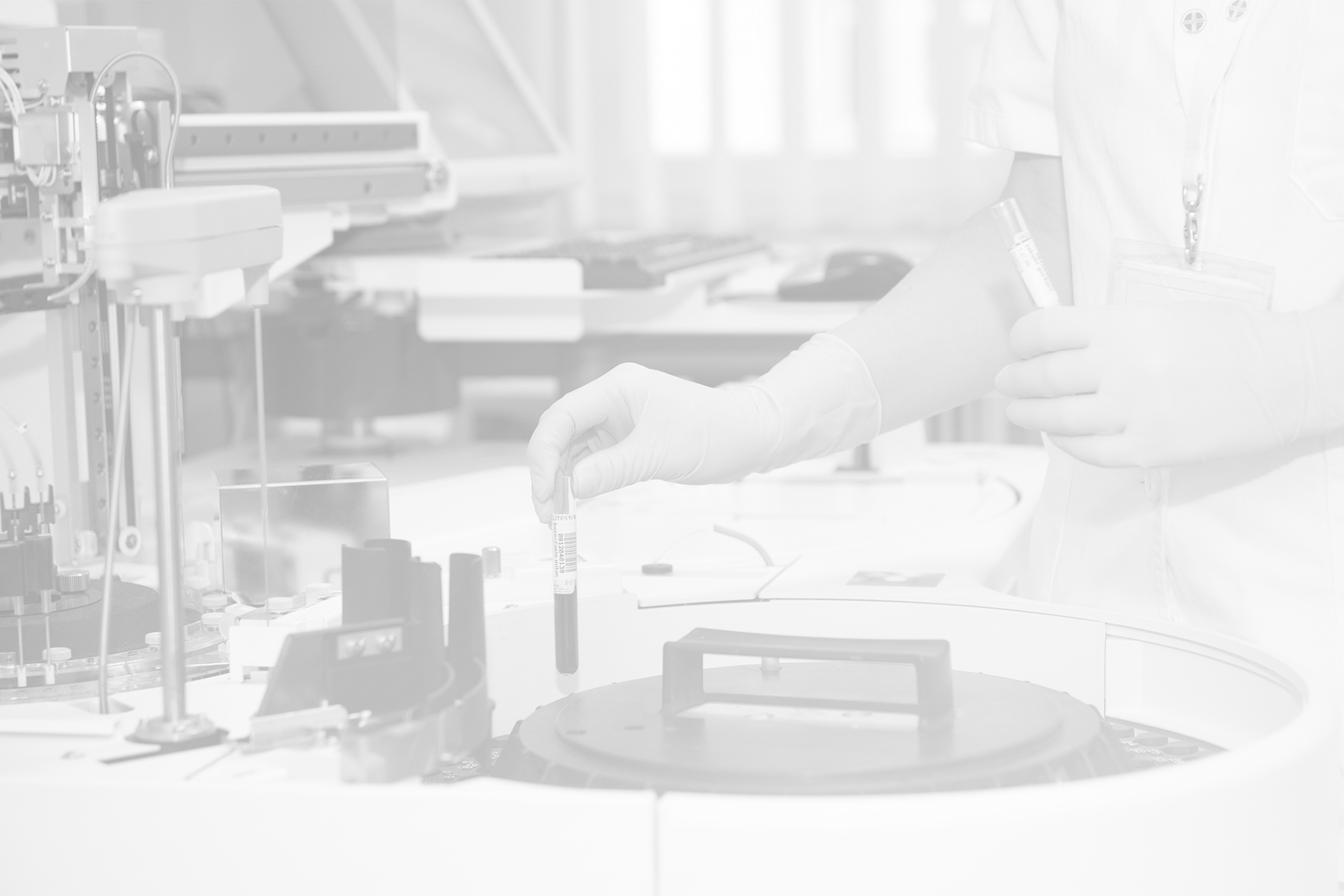 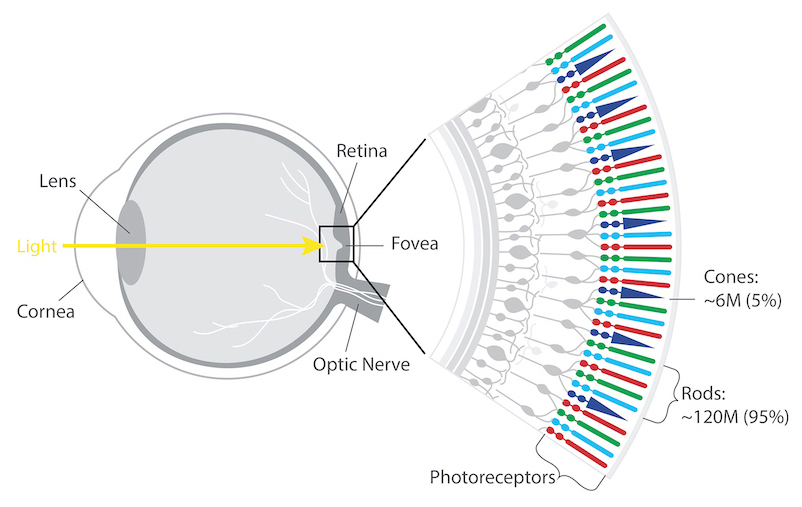 The retina’s photoreceptors (rods & cones) convert light into neural signals and send them to the brain for visual recognition.

Rods are responsible for peripheral, night, and black and white vision.

People with RP experience a gradual decline in their vision because photoreceptor cells (rods and cones) die. In most forms of RP, rods are affected first. Because rods are concentrated in the outer portions of the retina and are triggered by dim light, their degeneration affects peripheral and night vision. Night blindness is one of the earliest and most frequent symptoms of RP. When the more centrally located cones - responsible for color and sharp central vision - become involved, people lose color perception and central vision. Typically diagnosed in adolescents and young adults, RP is a progressive disorder; most people are legally blind by age 40. However, the rate of progression and degree of visual loss varies from person to person.

The National Eye Institute (NEI) estimates that approximately 100,000 people in the United States have RP. Worldwide, about 1.5 million people are afflicted. There is only one approved drug for a small subset of RP. LUXTURNA® is indicated for the treatment of patients with RPE65 mutations, about 1% of RP patients. While gene therapy has the potential to address pathogenic mutations, with thousands of mutations already associated with RP, a relatively small number of patients are likely to benefit from any single gene therapy. An effective small molecule treatment has the potential to work alone or in concert with gene therapies to improve patient outcomes.

NPI-001 increases cysteine levels leading to a boost in glutathione.

Extensive preclinical study of NP1-001 and its precursor molecule N-acetyl cysteine (NAC) support a strong mechanistic rationale for its use in RP, in which oxidative stress plays a known role.

Our approach is based on research with NAC and NACA (NPI-001) for the treatment of RP by Dr. Peter Campochiaro, George S. & Dolores Doré Eccles Professor of Ophthalmology & Neuroscience, Wilmer Eye Institute, The Johns Hopkins School of Medicine. Dr. Campochiaro, a renowned expert in retinal degeneration, has advised Nacuity on the clinical approach to a treatment for RP. 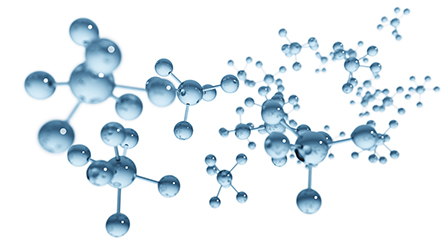 In a published study measuring Photopic B-Waves, which are generated by cone photoreceptors, the data demonstrated that orally administered NPI-001 preserved cone function in an animal model of RP.

Nacuity seeks to build on this work and leverage NPI-001’s advantages over NAC.

NPI-001’s advantages as a therapy, based on preclinical models, include: 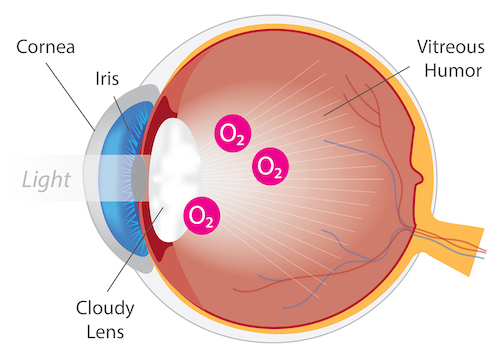 Cataracts are the leading cause of blindness worldwide. A cataract, opacity or clouding of the eye lens, is a direct result of ocular oxidative stress. Symptoms of cataracts include blurry vision, double vision, glare and faded colors. While cataracts occur primarily due to age, they can also develop as a result of an injury or disease. For example, retinitis pigmentosa patients are at a greater risk for early cataract, and patients undergoing vitrectomy surgery exhibit accelerated cataract progression.

Currently, the only treatment for cataracts is surgical removal of the affected lens and replacement with an artificial, intraocular lens (IOL). Powerful antioxidants, including N-acetylcarnosine31and NACA32, 13 have been shown to prevent and/or treat cataracts in preclinical models. No drugs are approved for the treatment of cataracts, resulting in significant unmet need and global market opportunity.

NPI-002 is a novel, differentiated, slow-release, small molecule. For the treatment of cataract, a sterile intravitreal implant containing NPI-002 has been developed, along with a precision delivery system. In vitro and in vivo studies have revealed no cytotoxicity with NPI-002. In ex-vivo models with rat and porcine lenses, NPI-002 inhibited oxidative-induced cataracts. The novel intravitreal implant eluted NPI-002 in the vitreous humor in a preclinical model.The NPI-002 implant is currently in a proof-of-concept Phase 1/2 clinical trial (NCT05026632). 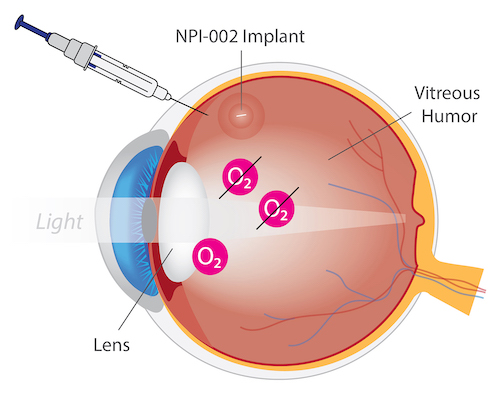 NPI-002 for Treatment of Cataracts 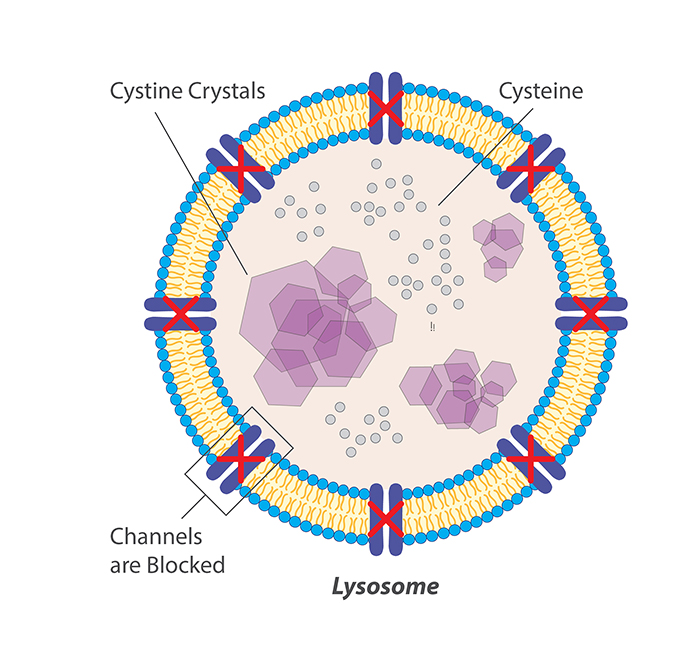 All approved cystine-depleting drug products for cystinosis contain the aminothiol, cysteamine. Cysteamine treatment causes intralysosomal formation of a cysteamine–cysteine mixed disulfide, capable of exiting the lysosome purportedly via the lysine excretion pathway.34, 35 CYSTAGON® and PROCYSBI® are immediate- and delayed-release, respectively, oral dosage forms of cysteamine bitartrate. Oral administration of cysteamine, although efficacious for cystine depletion in nephropathic cystinosis, is associated with poor patient compliance due to the unpalatable taste, odor of sulfur, and gastrointestinal side-effects such as nausea, vomiting and pain, coupled with a requirement for frequent, high dosing to overcome extensive first pass metabolism of the cysteamine.36 Hence, there is an unmet medical need for alternative treatments for cystinosis.

Previous studies suggested that increased oxidative stress plays a role in the pathogenesis of the cystinosis.20, 16 Indeed, the antioxidant, N-acetylcysteine (NAC, the active ingredient in MUCOMYST®, ACETADOTE® and CETYLEV®) has been shown to improve cystinosis. In a 3-month study of 23 cystinosis patients less than 18 years old without renal replacement therapy, the addition of oral NAC 25mg/kg/day to their cysteamine standard of care caused a reduction in oxidative stress, based on a decrease in serum thiobarbituric acid-reactive substances (TBARS) (p<0.0001), an improvement in renal function (based on levels of serum cystatin C), creatinine levels, and creatinine clearance.20

Nacuity has developed an oral dosage form to deliver a novel antioxidant for the treatment of nephropathic cystinosis. In a cystinotic cell model, treatment with Nacuity’s molecule improved cystine depletion and increased cell viability significantly more than treatment with cysteamine.18 A chronic oral toxicology program has been successfully completed along with a Phase 1 trial assessing safety. A Phase 1/2 clinical trial in cystinosis patients is planned. 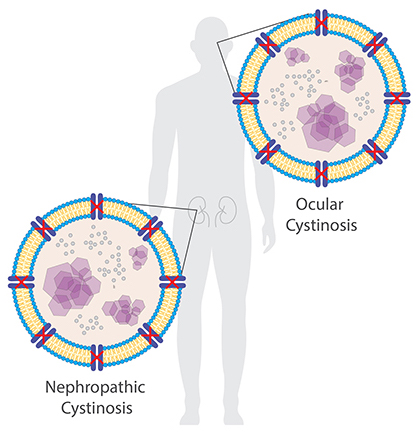 The accumulation of cystine crystals can damage many organs and tissues, especially the eyes and kidneys.

Ophthalmic insert for treatment of ocular effects of cystinosis 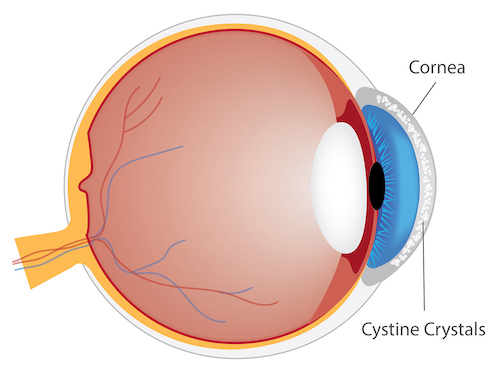 Accumulation of cystine crystals in the cornea

Furthermore, the current oral cysteamine therapy does not reach the avascular corneal tissues so it is ineffective in treating ocular (corneal) cystinosis.17 Similar to oral cysteamine dosage forms, CYSTARAN® and CYSTADROPS® eye drops both contain cysteamine (as the hydrochloride salt). The eyedrop products are indicated for dosing frequently throughout the day, i.e., every waking hour with CYSTARAN® and four times per day with CYSTADROPS®. Both eyedrop products are relatively unstable at room temperature, must be discarded within one week of opening, require frequent dosing, and cause discomfort. In light of the significant issues associated with currently available treatments, the need for effective and tolerable alternative therapies remains.

Nacuity has developed a prototype ophthalmic insert delivering a novel antioxidant to the eye to treat the ocular effects of cystinosis. In vivo preclinical studies with the insert reveal that significant levels of drug can be delivered to the aqueous humor daily by wearing the ophthalmic insert under the eyelid. Development and preclinical evaluation continue as a prelude to clinical studies. If the ophthalmic insert can be shown safe and effective for the treatment of ocular effects of cystinosis, it would offer a significant improvement in quality of life for those patients.

Nacuity has developed an oral dosage form containing a small molecule antioxidant for the treatment of rare neurological disease. In vivo proof of concept study has been successfully completed. Chronic oral toxicology studies and a Phase 1 clinical trial in healthy volunteers also have been successfully completed. A clinical development program is being planned. Orphan and rare pediatric disease designations for a rare neurological disease have been granted, thus, an eligible new drug application would result in Nacuity receiving seven years of U.S. FDA regulatory exclusivity and potentially a priority review voucher. 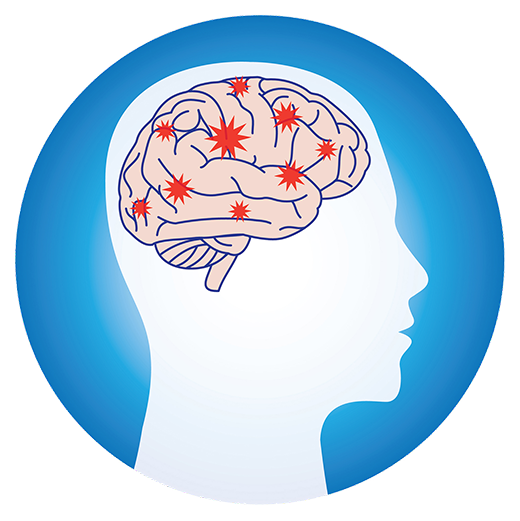 NPI-001 crosses the blood brain barrier as a potential treatment for a variety of neurological diseases.

Trademarks are properties of their owners. Printable List of References